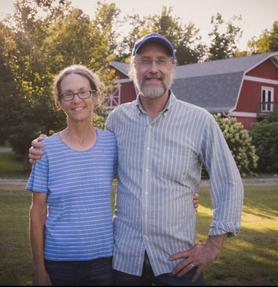 Our Farming Practices
Register for Our Online Programs
Buy Our Food

Farmers J and D grew up in the small town of Port Allegany, Pennsylvania on the Allegheny River near the New York state line. After stints in college and graduate school in Pennsylvania and New Jersey, where they both earned doctorates in neuroscience and psychology, they moved to North Carolina and married in 1992. After giving away their television and discovering Wendell Berry, they started RambleRill Farm in 2009 and haven't looked back.

Farmer J spent more than 20 years in the medical communications industry before shifting to full-time pursuit of farming and horticultural therapy. She became a registered horticultural therapist (HTR) through the American Horticultural Therapy Association in 2013. She earned her Associate of Applied Science degree in Sustainable Agriculture in 2014.
Farmer D works full time at the University of North Carolina (UNC) as Associate Director for Faculty Development in Research. Before that, he was a scientist and mentor at UNC's Skipper Bowles Center for Alcohol Studies, where he devoted three decades to researching the neurobiology of addiction. He is on the Board of Directors of Farmer Foodshare.